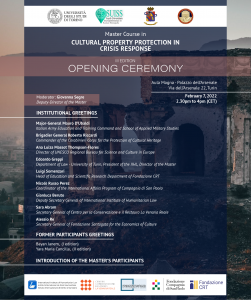 On  7th February, the President of the Institute Professor Edoardo Greppi and Deputy Secretary-General Gian Luca Beruto were invited to take part at the Opening Ceremony of the III edition of the Master Course in “Cultural Property Protection in Crisis Response”. The ceremony was held in Turin (Italy) at Palazzo Dell’Arsenale, the seat of the Training Command and School of Applied Military Studies of the Italian Army. The representatives of the partner institutions which contribute to the organisation of the Master took part to the ceremony. Among them Ms Ana Luiza Massot Thompson-Flores, Director of UNESCO Regional Bureau for Science and Culture in Europe; Brigadier General Roberto Riccardi, Commander of the Carabinieri Corps for the Protection of Cultural Heritage, Major-General Mauro D’Ubaldi of the Italian Army Education and Training Command and School of Applied Military Studies, Dr. Alessio Re, Secretary-General of the Fondazione Santagata for the Economics of Culture, Dr. Sara Abram, Secretary-General of Centro per la Conservazione e il Restauro La Venaria Reale, Mr. Nicolò Russo Perez of Compagnia di San Paolo and, Mr. Luigi Somenzari of Fondazione CRT. The event was chaired by Professor Giovanna Segre of the University of Turin, Deputy-Director of the Master . Since 1976,  the Sanremo Institute has been always devoting special attention to cultural property protection (CPP) which was regularly included in the annual programme, either in basic courses or in other specialised training activities such as advanced courses or thematic workshops. Its cooperation with UNESCO, through the organisation of seminars and other initiatives on the occasion of the different anniversaries of The Hague Convention of 1954 and its Protocols, further enhanced the Institute’s commitment in the field of CPP, resulting in the drafting and publication of the Military Manual on the Protection of Cultural Property in 2016. Since 2018 the Sanremo Institute is involved in the implementation of the Master on “Cultural Property Protection Crisis Response”, which aims to prepare future generations of civil and military professionals with a multidisciplinary background and advanced expertise in the protection of cultural property in situations of armed conflict and natural disasters. This, with a view also to the social and economic recovery of tangible and intangible cultural property in affected areas and communities.